.
As an ass-side, monkey butt or chafing either riding a road bike or a  motorcycle can literally be a pain in the ass. Chamois cream which can work well for bike riding, does involve spreading lubricant over the offending area. Great for a day but really unpleasant if you have to squeeze into the same lycra for more than a day. Enter Crotch Guard!

I read about Crotch Guard on a long distance cyclists blog, the poor guy had a real issue as he rode across the USA, things were getting painful in the hinterland, that was until he tried Crotch Guard.

It is a simple mix of essential oils and antibacterial liquid  which is sprayed onto the offending area at the start of each day. I used Crotch Guard for a 6 day period riding an Endruo Bike in Sardinia. We rode on and off road, standing, sitting and on long 7 - 10 hour road rides to and from the trails. 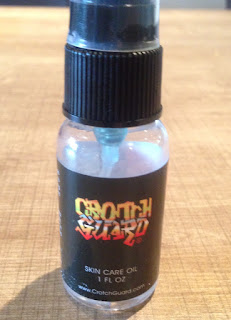 Crotch Guard is brilliant, smells good, feels good (when applying) non messy and made the days in the saddle more than bearable. Highly recommended for preventing chafing and monkey butt.
Posted by Duncan McCallum at 17:47