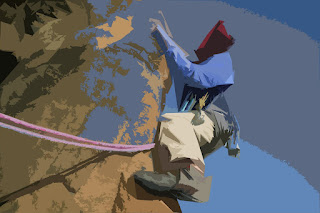 I own a freighting number of shoes. It was simpler when I was first given the school equipment list. It said; boots - one pair.

Caught between wanting to fit in fashion wise and not knowing what I was doing, I asked the teacher whether Doc Martins would do. He said yes. I told my parents this and we dully trooped out to by a brand new pair of maroon 12 hole “Docs”.

It was the worst boot purchase I ever made. On the grassy decent from the top of Sgurr Mhor in the Fannichs it was like wearing ice skates; no grip, no support, and the biggest blisters I have ever had. So at the age of 13, I learnt a painful and valuable lesson. Get the right footwear for the job. Now looking at the “boot room” I think I may have taken this to excess. There in front of me are 13 pairs of shoes and boots, not including a few random pairs that I still hold onto, because they might become useful some time in the future. Shoes for long routes, short routes, indoor climbing walls, ice climbing, hill walking, cross country cycling, road biking, mountain biking, down-hilling, long crag approaches, warm weather South of France sandals, canyoning , snowboarding, the list goes on. Some are comfortable and become friends, heavily worn and honestly used, other like my wet suit boots, gifted for my BBC Adventure Show work and only used once or twice.

Today though, it’s a simple choice. I am in Sutherland looking at the eastern flank of Quinag. I put on an old pair of Sportiva Boots. The sole is becoming detached from the uppers, which are cut and scarred from a couple of rough days on the Skye Gabbro; a rock as rough as a cheese grater. Cool to climb on, but vicious if you brush against it. Leaving the kids on the beach in the sun, Simon and I have escaped the duties of respective families, to bond on the hill. Simon is a true mountain enthusiast, walking and climbing all of over Scotland. We know each other a bit, but he has only known me in rock climbing mode and even then mostly in meeting at Alien Rock in Edinburgh, pre Ratho days. I think since then I have mellowed a bit and finally we have a chance to breathe in the same mountain air for a few hours.

Today there is no hill or climbing agenda, no “target” pushing me forward, just a rare chance to walk and talk in the sun. We park the ubiquitous VW camper beside the road and decide to head up the eastern ridge. After a few minutes of sandy trail we are moving over huge slabs of sandstone with quartz crystals embedded in them. We are walking quite fast, enjoying the light pacs we are carrying. Almost running, we are speeding up the slabs. The boot friends, roll from one slab to another on the ascent. The pock-marked rubber biting into the ancient friction rich rock. It’s a great feeling. You can feel the texture of the mountain beneath your feet, every step different, some long hops, some little short stutters, some with biting friction, others wet and slippery. It’s a joy. The sound also varies; the occasional sandy slip, to the tap, tap of the boots on the clean rock slabs. We talk about family and life, or more specifically, how or if, family life with young kids has restricted our mountaineering freedom. Do we approach risk and commitment in a different way now we have small footed responsibilities? We talk about film, work and relationships. It’s a lovely flowing day. On the summit we pause for a bite and a drink. I have typically forgotten a flask and Simon has not. We share, staring out over the wondrous scenery of Wester Ross and Sutherland. It is truly stunning, lochens and moor, sky and sea. Russet browns and reds, blue sky and silvery sea. The foot path has cut trench in the earth on the summit and is slightly shocking, the deep erosion telling the tale of many other boot prints and personal journeys. On the descent we run and jog back to the van. My feet are now tired and getting sore. The old boot friends are complaining. It may be their last outing, but they have served their purpose. However, a “new-old” friendship has been cemented, no longer wary of each other in that slightly male stand-offish way. We have bonded though sharing.

I keep the old boots.

Posted by Duncan McCallum at 11:09