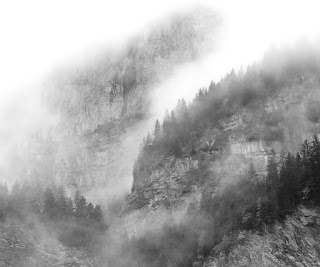 Wonder world and the dread of not knowing

A short parable to start with…

Two years ago I had the fine experience to find my self in Kalymonos Greece on a climbing trip. It’s a limestone festooned island with black volcanic ash beaches. It not over developed, not tacky and kind of rustic, run down and nice. We were climbing in a small group of people who all new each other but not that well. After a late start, as we were waiting for the sun to leave the cliff so we could climb in the cool I reached the top of my first warm up climb. It was a 30m route sitting on a big cliff 100m off the sea on a raised beach. The last two moves of the route involved climbing through an exposed layer of fossils embedded in the limestone matrix; quite beautiful.

As my partner lowered me to the ground, I just happened to comment that I thought that it was amazing that we were playing and taking pleasure from a structure that a billion years ago had been at the bottom of the sea. A shell, which was once alive, had found itself as crucial hold on a rock climb. My partner then said that this was not true, and that the world was only 7000 years old and that all fossils were put there by God as a test of true faith. I was flabbergasted! ‘Evolution is an unproven theory’, he continued. Well the latter point may be worth debating whilst stoned in a tent somewhere in the high mountains to pass the time in a storm. The fossil “test” assertion, however, was absolutely impossible to argue against. The cold logical conclusion that every thing was a test of faith is clinically final; end of argument.

From my earliest excursions in the North West of Scotland, I have wondered at the rocks. The beauty of 1000ml year old Torridonian sandstone, which already prehistoric, contain even more ancient river wash pebbles. The huge folds in the Lewisian Gniess in the cliffs above Kinlochewe, signal ancient forces pushing the crust of the earth with unfathomable pressure, 2500ml years before any thing walked in the tropical forests and deserts of Scotland, when our ancient mountains were high mountain ranges.

To the struggling climber they are just an inconvenient change in friction. But to me they are an unimaginable mystery in time. Imagine the next time you walk on Sullivan that this beautiful form is just the crumbling stub of a once great mountain, which could have been tens of thousands of feet high.

The pebble beaches of Tiree are strewn with hundreds of different rock types all rounded off into fist size pebbles all from different eras. They are some of the oldest rocks in the world, there for you to touch. Sitting on top of this West Coast Mountain at the junction between the ancient sandstone and the Gniess, to me is truly a spiritual experience. It does not have a text laid out in front it, to try and make sense of the vastness of creation. It has no pacifying psalms, torahs, verses or chants to try and explain the wonder. It leaves me open, with no answers, no creed, no tribe, rules or dogma. I do not need an answer. Touching this land, these rocks, walking in this fantastic landscape fills me with a wondrous joy. I know that I am part of this universe and that the material that made me, the crystals of the rock, the fingers of the wind and the waves on the beach, are all from the same source.

We live in an ancient and incredible land. The mountains lochs and beaches, all tell a tale of an incomprehensible time line. From where it comes from I do not know, where it is going; only time will tell. But here, just now on this mountain watching this sunset, its beauty makes me cry with wonder. The next time you have the chance, pause on your walk, climb, ride or run, put your hands on the earth and thank whatever creation you believe in, that you have the gift of consciousness.

Posted by Duncan McCallum at 13:16