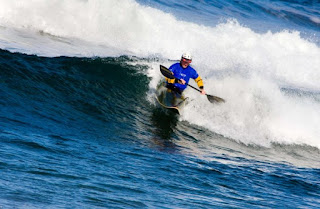 Out of depth. Part 2

So I am out on the water in Pease Bay near Dunbar, learning to Kayak surf with the world best Surf Kayaker and one of the worlds most unsympathetic friends.

I had just picked up my first wave, yea! I surfed for a moment. I like to think I pick these things up quickly. So after I had played on a small wave I thought I should try a slightly bigger one. I moved out in to the zone where the bigger boys were playing.

I managed to get into the pick up zone with only a couple of trouser filling moments and waited for a wave. Paddling with all my 10mins of skill I kept missing the lip. Just not fast enough. When it did come it was a much bigger wave than I was ready for, or wanted to see. It picked up the stern of the boat and it shot up vertically behind me. Lesson, always brace your knees in the cockpit because if you don’t you slip into the boat out of your seat and then you have no control. With the kayak at an angle, that to me felt vertical and with no purchase, I could feel the onset of a disaster.

The horizon disappeared and I found my self-staring down at the curling face of the bottom of the wave, holy crap…

Ok focus, at least make an attempt at trying to surf this, I quickly tried to turn left by sticking the face of the paddle onto the breaking face of the wave, it felt as though for a moment this was working, but I did not have the paddle at the right angle. Instead of holding me up the blade simply pulled me clockwise into the face, Opps…

Nature decided to teach me a lesson, the wave closed out over the bow, and rolled me over into the surf, I can remember the force of the wave catch my buoyancy aid, forcing me, at speed into the wave spinning, it pushed the boat down. In all disasters in white water it a good idea to relax and let the water do its thing, its going to push you down for a while and when the world is ready, it will let you pop up to the surface. Only this time I popped up upside down head facing the bottom of the sea.

I can roll a kayak in a swimming pool in 18 degree water, if fact it easy if you set your self up well, but this is a whole different story. After I got over the shock of the cold water, I twisted right under the water and tried to scoop the blade across the surface to perform an Eskimo roll, I remember thinking is it still PC to call it that? Anyway the first attempt failed, because another wave hit me just as I was just surfacing (that my excuse) I made a second attempt. My head and shoulders popped up out of the surf, but breaking white water is full of air, moving and scary, once again I failed. Time to bail. I let go of the paddle, bad form, ripped the spray deck off and whilst under water pushed myself out backwards and down out of the kayak. Green, brown, white water moved around my head and quickly gave way to air. Phew.

Exhausted, and slightly shaken I crawled on to the beach. Five minutes later I was back in the sea, but I decide to practise in the shallows. But what I did not know is that in shallow water the nose of the boat as the wave breaks digs into the sand. The boat went completely vertical and as the bow was firmly planted in the sand. It tipped me completely over. I landed with a watery thump in the shallows the paddle grounded just before my head did forcing the shaft into the bridge of my nose.

On the beach, there was dog that liked chasing sticks. That afternoon he got a lot of exercise.

Posted by Duncan McCallum at 08:18