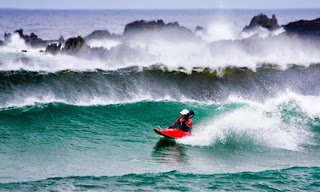 Out of depth. Part 1

I really don,t like deep water very much. I think it stems from getting dumped by a wave as a small child and dragged out to into deep water on Oldshoremore beach. Maybe to vivid and imagination, maybe I should never have watched Jaws. But suffice to say I am more earth than water. Funny this whilst at school I did lot of sea kayaking and some river canoeing. The more time I spent on the mountains the scarier I think water is. Also, I am a pretty crap swimmer.

So when Neil Baxter, ex world champion Surf Kayaker, and ex best man at my wedding finally managed to pursued me to join his dedicated little band of Kayak surfers for a session at Pease Bay I reluctantly accepted. After all I have been bullying him to come to the Alps to rock climb on some big routes and this was his bargain with me. If I tried kayak surfing, he would come climbing. We squeezed in to Jock’s White Transit and headed of to the Caravan Park at Pease bay. Why do all good surf breaks I visit seem to be near nuclear power stations? The treat of drowning, and being irradiated at the same time, great.

Neil is an expert in Carbon Fibre design, and performance kayaks are his forte, so we had no shortage of boats to paly with. I watched the team pull out from the van a selection of three grand surfing boats, until they cam to mine, and there in front of me was dumped on a plastic bathtub of a kayak. I was assured this was a good thing to start with. I really think the just did want me to total one of the completion boats. This downgrade equipment trend continued as I was handed a very large over stretched wet suit, I am not saying that these guys are fat, bulky, beer bellied paddlers but the wet suit was not figure hugging. Even before I “hit” the water the suit gaps, suggested a cold nether region and a shrunken manhood. This is a hard sport, one for dedicated and tough people. Standing on a wind swept beach squeezing into a wet suit, in conditions that were defiantly not Hawaiian, takes a degree of commitment similar to that required by Scottish skiers and ice climbers.

I sat in the boat and pulled on the spray deck and paddled out in almost a straight line to the line where the wave were breaking, Neil said “just paddle stargat” as the first breaker hit it first pushed the noe of the boat down and then it poped me out the other side, the wave passed but I had been pushed back towards the shore. Ok its time for some effort, trying not to wobble to much I pushed through the next set and found my self in the pick up zone waving for a suitable wave to shred. It took me three attempts to pick up a wave, they move fast an I just was not paddling fast enough to catch one.

On the forth attempt I found my self on the lip of a nice, and quite big wave, the tail of the boat went up the nose dropped down the wave face, hey I was surfing.

Trying to copy the big boys I lent left dropping my paddle onto the wave face for support I surfed for a few second, wow. For a moment I felt it, harmony between man and wave, water and boat, a rush of adrenalin and pleasure. The cold beach was worth that moment.

Posted by Duncan McCallum at 09:37