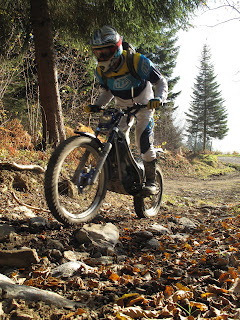 I am surrounded by a pile of books and DVLA DVD,s and in the presence of these official publications, I feel guilty. A bit like a small boy in a classroom full of kids, where the pickpocket is asked to come forward and even though your totally innocent, you feel the pang of some deep seated culpability. It’s the humiliation of the L Plate and I have not felt this for over 30 years, it’s a rare meeting between state and confirmed individualist. I find myself here more by accident than design. A few years ago, I moved to the French Alps to a village where every third person seems to own a Trials bike. The hills in the off-season echo to the sounds of two stoke growling and gunfire, where the hills and trails and sheared between the wild boar hunters and the riders of the single cylinder blue smoke thumpers.

Opting to join the Gas Gas culture rather than the gun culture, the dividing line between an early morning Pastis or a petit café, is an exiting revelation for a once confirmed mountain biker rider and downhiller. But six months into this journey, the 125cc I have been riding is beginning to die under my weight, its high pitching whining, a sound often ignored in other aspects of my life, has to be respected. The owner of local bar, having chucked himself down a ravine attached to his 300cc machine has decided discretion "is the better part". His pride and joy, so easily given up, now sits in my shed. It waits for me to be able to (legally) ride across the short stretch of hardtop that annoyingly stand between my house and the mountain trails. Little did I know that this simple 200m stretch of frost cracked tar, was going to lead me into a world of GS’s and GPS, and a brave new world of Adventure bike riding.

Posted by Duncan McCallum at 15:26