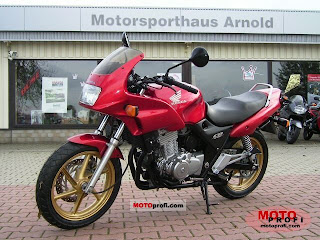 The CBT seemed to initially to be have been designed to allow kids or those wanting to ride a small CC bike easy access to riding and learning on the go. Whilst 25 years ago this may have been a good idea and back in the day when a bike test was a quick ride around the block whilst your examiner stood and watched you ride buy, now its seems out-dated and ridiculous.

Kevin my great trainer from KDM training http://www.kdmtraining.com/index.html met me on the small square that pretends to be Nairn’s CBT training area and we walk towards two bikes, a rather beaten up 125 and Honda CB 500. Having asked me some questions; what do the brakes do? where is the oil filler? tire (tyre) tread questions, Kevin decides that starting me on the 125 is nonsense, and plonks me on the 500 cc bike.

Immediately the thing that surprises me is the weight of the bike, it’s unbelievably heavy and I almost drop it as I take it of the stand. My only experience of sitting on a Honda 500cc machine before was travelling though Edinburgh on the back of Judy Dean’s (I fancied her rotten) bike on the way from the grounds of Napier’s Photographic department, where we both studied, to my flat, where she refused to come “up for coffee”. So brief and frustrating it was and also a situation where the weight of the bike did not feature, as I was much too interested in experimenting with other unrequited things. Waist or Grab bars? Too late to decide now, I think.

Wobbling around doing figures of 8’s and mini cone slaloms soon saw me riding in the abandoned business park next to the CBT area. Quickly the mirror-signal-lifesave check routine was learnt and couple of emergency stops later, we headed off into the steamy metropolis that is Nairn. Having never ridden anything bigger than a 125cc Trails Gas Gas before, the sensation of speed even at 40mph was great, if not a little frightening and to start with but the oddest thing was changing gear whilst sitting down. The No-Seat trials bikes involve a mini-balancing act to be executed in order o change gear and the luxury of changing gear whilst sitting down was a pure pleasure. Having stalled the bike in traffic once, the afternoon settled down into a series of roundabout walk throughs and practise manoeuvres in the light town traffic. It was easy, the sun was out and the bike forgiving, but after a couple of hours I decided to call it a day, the old synapsis were just were beginning to fry. Back under a veil of screaming shite hawks (seagulls) Kevin sat me down in the back of his van and wrote out the CBT pass. Odd, I did not even know I was being assessed, "but hay", stage two completed.

The point is now I can legally ride a bike on the street, and I in no way did I feel ready or am capable of taking charge of myself in traffic on a bike of any size, this I imagine is the start of a very dangerous period…

Posted by Duncan McCallum at 16:55