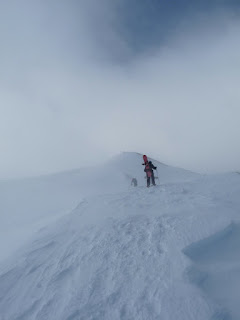 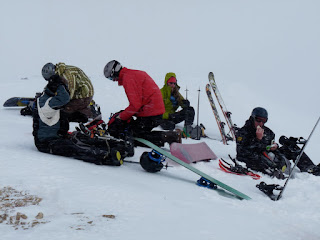 Winter sports in Scotland can be a revelation. The hills in full winter garb, under a blue sky can rival any landscape I have seen. In bad weather, even the simplest of winter days can be an arctic test of endurance. I have long been a fan of the Cairngorms, their rugged beauty both majestic and intimidating. To the ill equipped, they are a place of tragic encounters. Today was a test day for an expedition to Kashmir. Neil Baxter, infamous Kayaker and recent on-screen torturer of Fred MacAulay and Dougie Vipond and I were heading off to the Himalayas to join a bunch of hardened big mountain ski-tourers. The scene was set for 3 weeks of digs about “slowboarders” and “gays on trays”, so in order to deflect as much of this verbage as possible, we thought we had better work though our gear and systems on a Scottish winter hill. It was a foul day with a pretty high wind. We parked in the Coire Ciste car park. The lifts were shut. We were promised a people free morning.

We opted to try short approach skis and to carry the snowboards. Just the simple act of putting on and lacing boots was a test of endurance. It was about -8 oC at the car park with a healthy 30-40 mile an hour wind, dropping the temperature to about -30oc. Our exposed hands felt the bite within just a few seconds of gear fumbling. Note to self: “buy Black Diamond ski touring gloves”.

With the wind blowing horizontal snow at our backs we took it in turns to break trail up into the Coire. As we zigzagged our way up it became obvious to me that even though Neil is a magician on the water, and had a good few years of Canadian snowboarding under his belt, this was altogether a new experience for him. Dressed in some trendy snowboard gear he quickly overheated and stripped off to thermals and micro fleece, which within minutes became encrusted in rime ice. He was walking too fast and sweating too much. Having learnt the hard way, I have long since dumped snowboard and ski clothing and opted for mountaineering kit, so I was pretty comfortable, apart from a cold ear and a freezing pinkie.

Soon the wind picked up again and our ridiculous snowboards began to act as unwanted sails on our backs. Layers of wind-slab began forming in patches on the hard snow underneath our test approach skis. The combination of being blown about like some snowboard weather vain and the snow breaking away under our feet meant it was physical, be we were having a ball, or at least I was, This is what I wanted to feel; alive, in a wild place, working out problems, feeling in control in difficult conditions. With visibility down to 50 meters we reached the top of the ski lifts just below the summit of Cairngorm. Neil had been making all the right noises, but as soon as we stopped to check the map, things changed. His skin looked in patches like white putty, and without a decent shell layer he chilled fast. 400m from the Ptarmigan restaurant we bagged it.

Making the transition from climbing to boarding, the wind threatened to blow our gloves away, rip our jackets from our hands and send our boards skidding off down the hill, Neil’s hands were stiff and cold. The ski/ride back to the car took ten minutes. It had taken over and hour and a half to climb to the high point. It was short day on the hill but we learnt a lot. I learnt to look at the big picture and make decisions not just based on how I felt; Neil that it was time to shop for some serious hill gear.

Posted by Duncan McCallum at 10:45