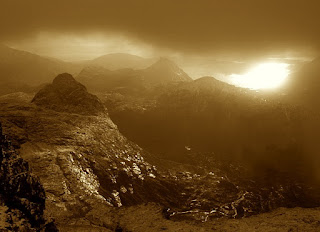 3.Skye was the limit

With any sport there is a period of learning, consolidating and performing. Chuck in a few more variables like a flexible, organic medium like ice, (and people), the learning never stops. The Skye ridge in full winter conditions is a site to behold. The jagged peaks of black basalt crisscrossed with snow gullies and ice runnels, is truly magnificent. I have always loved the concept of first ascents; it’s like creating a little piece of history; to be first, unique and unrepeatable.

We got up far to late, Dave and I, and struggled into Coire Lagan under heavy winter packs. It was perfect. Almost no winter routes in the Coire, and conditions were great. It was truly magnificent, rocky and completely iced up; a very rare occurrence. Standing underneath the Cioch, famous for the “Highlander” cliff fight scene I waited for a rather unfit partner to catch up. I scanned the cliff above for new route potential.

Dave eventually dumped his pack in the snow and asked me what the plan was. Not knowing much about the crag, I opted for a line of unclimbed ice that ran just right of the main buttress. I set off leading, the ice was only a couple of inches thick, so by the time the rope ran out at 50m, I had placed no protection. Wedged behind a boulder I brought Dave up, with each swing of his ice axe he looked shakier, as his fear and panic took over. At the belay he refused to take his turn at the front.

So the day paned out. Every crack I found was chocked with ice and protection sparse, and the climbing got harder and harder. With no concept of time I got stuck into a pitch of pure, hard mixed rock and ice climbing. I was now fully committed on a steep wall. I tried to place a metal piton and dropped it. Now in a position I could not retreat from, and at my limit, I clicked into another zone, calm and clear. The move appeared. Pulling onto a ledge in the sun I sat down shattered. Using all my strength, Dave now had to be hauled up the wall. He flopped onto the ledge beside me. Above us, a beautiful crack lay just out of reach. Even though I tried 10 or so times I could not make the next moves. We were 50 feet from the end of the route and I was spent. Suddenly I noticed the sun, well the last rays of the sun. We were buggered. 500 feet off the Coire floor on big cliff with limited gear, shattered, with a freaked out partner.

Dave gave up and started gibbering. The stars came out, and the head torch went on. I did not want to spend all night out, so I pushed, lowered and cajoled Dave down the cliff in the dark. I lowered him down taking the weight off the gear to stop it puling out and sending us to our deaths. Then gingerly I down climbed. Half using the rope for support, I inched down the rock. Lights appeared in the corrie basin below. It was 10pm. Then they disappeared.

I climbed down the first ice pitch; every time I swung my axe I could see sparks under the ice where my crampons and axes punched though to the rock. The mountains were majesty; starlit and covered in snow, the moonlight reflected off the sea. What an amazing country, place and experience. We got back to the hut on Sunday morning 1am. On Monday morning the papers read, “ two experienced climbers failed to return in daylight prompting the Mountain Rescue to go on alert, ” and I went back to school. I was 16.

Posted by Duncan McCallum at 13:31