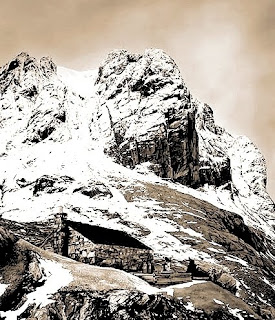 It is almost 35 years ago to the weekend that I stood in the cold early morning light in the Golf Course car park at the foot of Ben Nevis, with an ill-fitting rucksack on my back and a pair of bendy hill walking boots on my feet. To say I was scarred was over stating it, but I was nervous. After all, this was my first ever winter climbing experience and it was on the “big bad Ben”. My climbing partner, Ian Dally was 18 years older then me; a mighty veteran of expeditions to the Alps and the Artic peaks off Baffin Island in Canada, so I was in good hands. Why he thought that climbing with a gangly school boy in a pair of cut off jumbo cord breeches on one of the biggest walls in the country was a good idea, I will never know, but we set off up the track, with the morning frost crunching under our feet. Every breath and footstep took us closer to the biggest ice festooned cliffs I had ever seen. Icicles and gullies drop from the Summit observatory plunging towards the famous climbers hut, which lies under the North Face of the Ben. The names of these climbs; Point Five, Mega Route X, Gully, Echo Wall are legendary to climbers, mapping out a history of generations of climbers who, for over a hundred years, have dared to test themselves in this magnificent arena.

As we walked under the dark rock and ice walls, I could feel their weight baring down on my shoulders but any thoughts of actually climbing on these walls, were soon lost in the processes; simply putting one foot in front of the other.

We stopped at the hut and were handed a cup of hot tea from one of Ian’s friends who was lucky enough to have a place for the weekend. I stepped into the hut, its dark smoky walls echoed with the spirits of Patey, and Haston, dead legends whose deeds and words filled my young head. To the mountaineer, especially the ice climber, Ben Nevis is truly a giant, which to this day still offers unclimbed challenges to set the mind wondering and the palms sweating. We headed out from the hut. Like a puppy, I tried to stay as close as I could to Ian’s heels, stepping in his prints, matching his slow steady and relentless pace.

It took at least another hour to reach our objective, “Bob Run” a Grade II/III ice climb, one of the shortest routes on the mountain but with the longest approach on the hill. Ian dug a ledge into the snow and we put on our crampons. He then cut a T-slot into which my brand new ice axe was battered, and tied it off with a sling. Looking back, this would never have held a leader fall, but this was more to make me feel comfortable and stop me tripping over my crampons and pulling him off the route. I flicked the rope over my back and proceeded to waist belay Ian as he tip-toed up the ice above me. That day was a make or break for me. It was long, hard, and I had no clue what I was doing, but at the end of that day, sitting in the West End Hotel with an underage pint in my hand I was hooked. I cannot thank Ian enough for having the patience to guide me into a life in the mountains. That day I learnt to step-cut in ice, abseil from a snow bollard, to walk at “guides” pace, and so much more. Climbing and travelling in the Scottish Mountains has been one of the greatest gifts of my life.

Posted by Duncan McCallum at 15:07