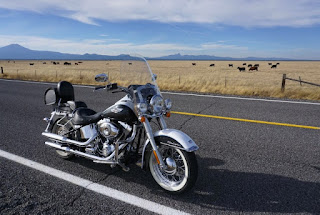 AT the side of the road, a coyote stands and stares as the chrome beast burbles past. It is on the junction between wilderness and human intervention where much of Oregon sits. It is part liberal and progressive, part conservative and frontier, with huge forested national and state parks, high desert wilderness and towering glacier-capped volcanoes.
To tour the state the tool of choice has to be something that keeps you in contact to with the air, smells and textures of the place. I have chosen a 1600cc lump with the acceleration of a Morris Minor, a Harley-Davidson Heritage Softail Deluxe: the pinnacle of American V-twin excess. Weighting in at 315kg, around twice the weight of a normal motorcycle, and with a seat as big as an American family-sized pizza, the two-cylinder bike is the epitome of the American Easy Rider dream. It is no longer the renegade mode of transport but more often than not a great conversational centrepiece, a vehicle of connection with people and the landscape.
If there is any state that suites a big cruiser motorcycle it is this one. Forget the mid-western flat expanses, the crowded coast roads in California and the blistering heat of Texas, Oregon has the roads and the beauty to make it a must on every motorcyclist’s bucket list.

Recommended by
I picked the bike up from Moto Fantasy bike tours in La Pine, 20 minutes south of Bend, which sits at the eastern edge of the Cascade Mountain’s Ring of Fire. This is a chain of massive volcanic peaks that stretches from California to the border with Canada. Starting the machine is the first surprise of the day: the sound is like a ripping thundercloud, and the whole bike shakes with that unmistakable sound of draining oil wells.
Heading south on Highway 97, a long straight route that divides the state in half, gives me a chance to get used to the huge cruiser. After 30 minutes on the highway my first real turn of the day leads towards Crater Lake National Park. Established in 1902, the park is one of the oldest in the United States and the only one in Oregon.
The park surrounds Crater Lake caldera, a remnant of a huge destroyed volcano, Mount Mazama, and the surrounding hills and forests. The lake itself is the third deepest in the western hemisphere at more than 580m deep. To put that in context, Loch Ness is around 230m deep. It is one of those sights which, although young in geological terms (the mountain collapsed 11,000 years ago), astounds the observer with its sheer scale.
Dropping off the southern slopes of the caldera the road eases its way though beautiful farming country towards the Kalamath Native American village of Chiloquin.
One thing any visitor will notice is that rural America is filled with dying communities. Bypassed by visitors and large farming concerns, many a small town is rotting in its foundations. Abandoned buildings and businesses still filled with their owner’s tools rust and collapse by the highways. It is a stark reminder that this is still frontier territory and a young country struggling with its scale.
The loop road west towards Mackenzie Highway 242 and then back east towards Bend’s ski resort Mt Bachelor is beautiful and empty. Curving, rising and falling between lava flows, some only a few thousand years old, the road is dotted with trail heads (walking paths) and for those willing to take a hike, give access to backcountry trails and hikes worthy of exploration. A 13-mile all-day climb of South Sister Volcano at 3,157m (10,358ft) is a must for those with strong legs and a need to explore deeper into this amazing country.
East of Chiloquin and Highway 97, things are different. The Cascade Range drops dramatically east to the “badlands”, and the thick sequoia forest thins. The high desert land, much of which was a huge lake 11,000 years ago, is astounding. Oregon’s mini Ngorongoro crater, named the Hole by an unimaginative settler, sits next to the Fort Rock “tuff ring” which was home to native people for 11,000 years. This giant semi-circle of cliff, which was once an island in the now dry sea, continues the extraordinary geological and social journey that is the American north-west.
While we share a common language, the veneer of a common understanding and culture, the more time I spend in the US the more I realise that its youth and sheer size seem to create its biggest contrasts and challenges.
Oregon’s main high desert town was only properly settled in 1850, almost within the stretch of family folk memories. While in Britain we were building museums and starting organised football leagues, the first dusty wagon trains were being harried and attacked by Native American tribes who were being pushed out of their traditional hunting grounds. They had been there for 400 generations; European settlement is only really a few generations old.
In a way, it still feels like a frontier and the prevalent attitude is still one of self-reliance, personal survival and independence from distant government interference.
Due to its low seat height the huge Harley-Davidson is remarkably easy to manoeuvre at slow speed and more comfortable than it looks. Get the thing up past 65mph and the big beast leaves its sweet spot and starts to shake and wander; it is no sports bike.
However, the big cruiser, which by legend has Harley’s worst-handling frame, is the perfect mobile sofa on which to admire the passing scenery. There is something emotive, visceral and quintessentially American about sitting astride the huge V-twin moving through ancient towering forests into the desert lands.
Share article
It’s an image celebrated in many films. It paints a picture of something that reflects the best and some of the most challenging things about the US: freedom, excess, brash confidence. A bike takes you closer to all of this, the air the land and its people, rendering it an experience worth savouring.
Duncan McCallum hired his Harley-Davidson Heritage Softail Deluxe from MotoFantasy Vacations in La Pine, Oregon. Visit motofantasy.net. Priced from $150 (£105) per day plus insurance with discounts for multiple-day hires.
Posted by Duncan McCallum at 10:27